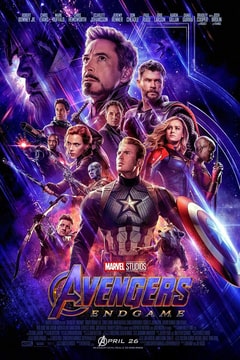 There are new movies coming out every day and it’s harder and harder to be able to track and see all of them. That is why we decided to review each and everyone so we can help you make an educated decision about which movie to see and which one to skip. Avengers: Endgame is a movie that is very exciting packed with action and very emotional. It’s the ending of the MCU saga and it has a lot of twists and unexpected turns. In this one, the Avengers are trying to beat Thanos and reverse his previous actions which deleted half of the population on the planet. (Image Credit: amazon.com)

The lead role is played by Robert Downey Jr. who plays Iron Man. Because it’s an Avengers movie all the lead actors from the other MCU movies are also in the movie so the entire cast is incredible and they are all doing an amazing job making this movie very fun to watch. The movie casts Chris Evans, Mark Ruffalo, Chris Hemsworth, Scarlett Johansson, and many more.

The performance of everyone in the movie is on point and probably the best thing about it. They are all acting at their best level. They play of each other excellently and their acting will keep you entertained and on the edge of your seat at all times.

The entire production quality is amazing. It’s the finale of the MCU saga so the producers had to make it perfect. It’s truly one of the best-produced movies of all time which is why it’s so highly rated and engaging when you watch it.

The script is great as well. They are following the prequels inserting humor along the way and in between the serious action scenes. It keeps the audience engaged and holds their attention for the entire duration.

This movie will give you incredible entertainment. If you’re a fan of superhero movies, this one is the most epic one that you should definitely see. All the actors are contributing to this with their performance and the special effects are extremely well-executed.

Overall it’s one of the best superhero movies that any action fan would love. It’s packed with action, great actors, an interesting storyline, and funny scenes. It has it all and it will keep you entertained for the entire duration. It will also make you emotional with all the plot twists that the writers and director have in store for you.

The movie is extremely well-made and I cannot see any place for improvements. Maybe some scenes could be cut out so it’s a bit shorter but other than that there’s nothing that I would personally change.

A movie that you have to see. Action and superhero movie fans would love it for sure. It’s very fun to watch, it keeps you entertained and makes you emotional. The actors are portraying their characters to perfection which further improves the movie.