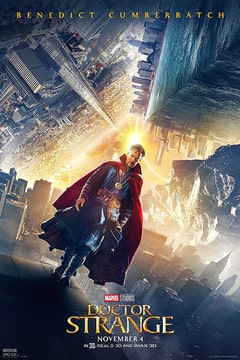 More and more movies are constantly coming out and it’s almost impossible to watch them all. That’s why we decided to do it for you and let you know what we think of them so you can make an educated decision about which movie to see and which one to skip. Doctor Strange is a movie starring an amazing actor who does an excellent job in this role. Benedict Cumberbatch is the lead role and in this one, he’s a doctor that has an accident that leaves him without being able to use his hands. Because the medical world is unable to help him in any way retrieve the use of his hands, he decides to look for an answer elsewhere and stumbles into a mystical world. (Image Credit: amazon.com)

The lead role is played by Benedict Cumberbatch who is an amazing actor with many successful movies behind him. He’s the main protagonist in the movie while the supervillain is played by Mads Mikkelsen. The supporting actors and actresses are also some famous Hollywood stars like Chiwetel Ejiofor and Rachel McAdams.

The performance of Benedict is just like everyone would have thought. He’s doing an amazing job at portraying the character and his acting is making this movie incredible. The rest of the actors and actresses are also playing their roles perfectly which makes the movie even more fun and entertaining.

The entire production on another level. Especially the special effects. It’s a movie that is filled with magic and special effects that are made to perfection. There are also amazing camera angles that elevate this movie to new heights.

The script is so well-written that it’s one of the better scripts I’ve ran into in a while. It’s so fun and interesting at all times and provides you with everything you need to enjoy a movie. It keeps the audience entertained at all times which is what a great script should do.

This movie is very entertaining. It’s a superhero action movie that is very fun to watch. The special effects are amazing which adds to its value a lot. Benedict is also making this movie amazing with his performance and the script is just so fun and interesting. Basically, it’s a movie that anyone should see.

Overall it’s a great movie and one of the best from the MCU. It’s especially great for people who like superhero action movies. Even if you’re not so much into superhero movies this one is very interesting because of how great it is made.

The movie delivers on every front. There’s literally nothing that is missing or is too much about this one. They really hit the mark with the cast, effects, script, and execution. This might be the best one in the MCU saga.

A movie that you would surely enjoy. It has an incredible cast that does the job perfectly and amazing special effects and camera angles. It’s incredibly fun to watch and it’s exciting at all times. It will keep you entertained for the entire duration. Benedict is portraying the character in a very convincing way and Mads is also doing an excellent job as the supervillain.