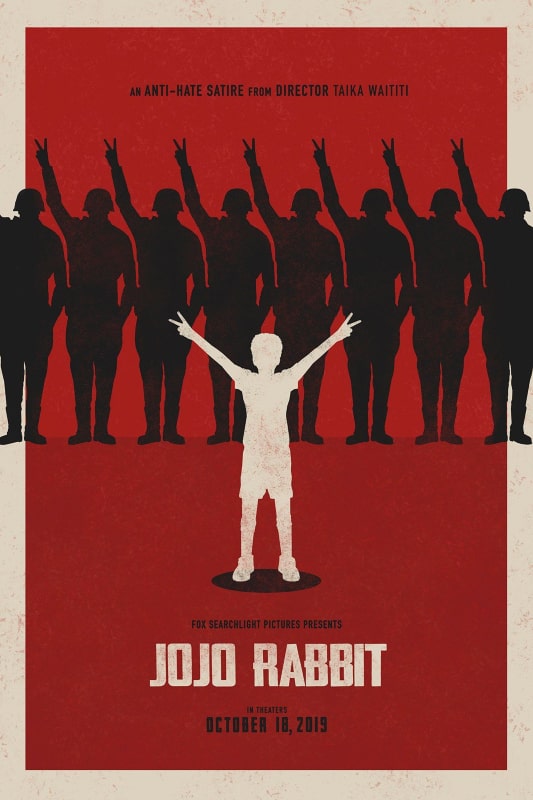 War is an unavoidable event that perishes all the goodness in the world. Here, we see the war from the eyes of a ten years old boy, tragic death in front of his eyes. A soldier still hasn’t reached maturity to understand what is worth fighting in their lives, carrying deadly weapons, throwing grenade like a man, and fought in a war like no others. (Image Credit: Pinterest.com)

“Jew and Nazi cannot befriend.” A heartbreak moment for a ten-year-old boy to understand the meaning of that. A boy heart who still soft and doesn’t know the meaning of war. Relationship of a mother and son that will melt your heart. Ex-soldier who denied the law and saved a little girl and boy from being killed alive. Humanity is something we can’t buy. Indeed a heartwarming comedy movie that touches the heart of thousand of the viewer.

A story about a young Johannes Betzler who idol Adolf Hitler in his life, getting the name of “Jojo Rabbit” when he refused to kill a rabbit using his bare hand during his training camp. His imaginary Adolf Hitler convinces him to “be the rabbit” and show them the rabbit is brave, sneaky, and resilient. Unfortunately, that courage causes him a couple of stitches on his face when he accidentally blows up a grenade near him. “Enjoy that attention, kid; not everyone lucky enough to look stupid,” a piece of a mother, Rosie, advised his son. Quite unusual for a mother to say things like that,  brave enough to slap and kick the balls of Captain Klenzndorf. He got a hunch; something terrible would happen when he accidentally found Elsa, a jew girl hiding inside the wall. However, when he found out about his mother’s death, it was a shock, hanged in the middle of the street. No word can describe the heart of a boy. Sitting and looking at his mother’s dead body. “Love is the strongest feeling alive; life is a gift; we must celebrate it.” She spread peace propaganda “Free Germany” to treat everyone as equal. The only wish for a free jew girl is to dance happily when the war is over, so they did. Little Jojo Rabbit found the braveness and strength he’s looking for, bringing Elsa to see the outside world. The “free world” his mother wished for.

“Let everything happen to you, Beauty and Terror, Just Keep going, No feeling is final.“

Roman Griffin Davis (Jojo Rabbit) and Thomasin McKenzie (Elsa) performance are top-notch. Scarlet Johanson (Rosie) is fabulous with a German accent! There is a scene where she acts like her husband, mimicking her husband’s voice, totally speechless!. Taika Waititi’s role as the imaginary Adolf Hitler, the director, and producer for this film, a genius! An outstanding performance by Rebel Wilson (Fraulein Rahm), Sam Rockwell (Captain Klenzendorf), as the supporting role.

Winner for Best Adapted Screenplay from a novel deserves an Academy Award Oscar, BAFTA Film Award, AACTA International Award, AFI Award (Movie of the year) is predicted. Nominated in several other prestigious awards is unexpected, as this film deserves a win!

“Everybody gotta live” song written by Arthur Lee might be the perfect song that answers everything. Everything is possible when a genius director stumbles across the novelist vision. The best selling novel “Caging Skies” by Christine Leunens is the spur that brings this film as an award-winning film.