Jumanji – The Next Level 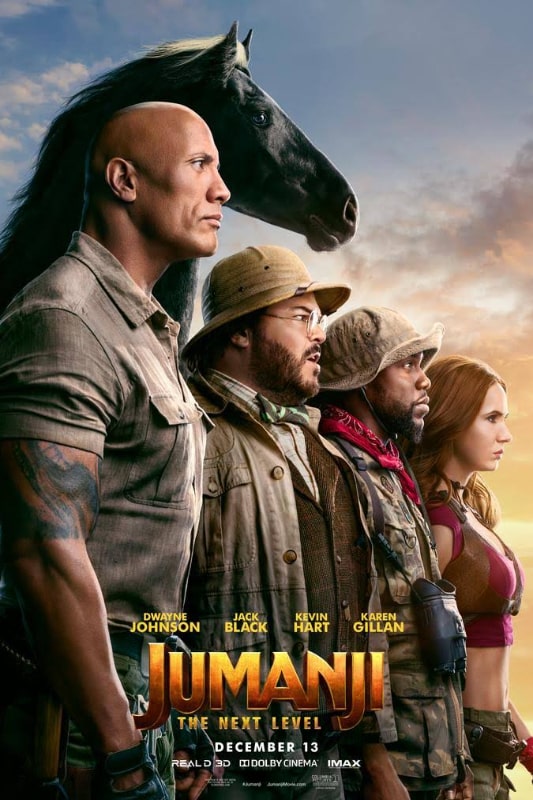 Jumanji – The Next Level

Have you ever read the book of Jumanji? This movie is the best adaptation from Jumanji’s children’s books written by Chris Van Allsburg in 1981. Jake Kasdan successfully brings us to Jumanji’s fantasy world in the live version once again after his first Jumanji’s movie colossal success “Jumanji: Welcome to the Jungle in 2017”. If you ever wonder how’s living in the virtual world would feel, watch this film, explore your fantasy and leave your reality behind. Receiving thousands of positive reviews and became the 10th highest-grossing in 2019 makes this movie the best fantasy movie you will never regret watching. (Image Credit: Imdb.com)

The adventurous quest of five friends in Jumanji’s world begins when Spencer decides to enter Jumanji again, hoping to become Dr. Bravestones. He felt tired of living in a useless reality. Without knowing his action’s outcomes, he got sucked into the game and became a low-life avatar character named Ming Fleetfoot, a Pick-pocket. Ming Fleetfoot’s character is a new avatar that doesn’t exist in Jumanji’s previous version, leaving himself clueless. Spencer, absent at the gathering, makes his four best friends Martha, Fridge, and Bethany, visit him at his house. They were all surprised when they found out Jumanji games are on, and Spencer is missing. Not too long after that, Martha and Fridge, with Spencer’s grandfather, Eddie, and his friends Milo, got drawn into Jumanji’s games, leaving Bethany. Things got more interesting as these times; they are randomly selected for their character. Jumanji Worlds is on a different level, and they all got new abilities and weaknesses in their avatar character. Martha continues her Ruby Roundhouse character, while Fridge is furious as he was chosen as the “Map guy,” Oberon. Eddie was selected as Dr. Bravestones, a fearless warrior, while Milo became Mouse, Zoology with the ability to talk to animals. Eddie and Milo’s confusion as they landed in the Jumanji world and embarked on a new journey will make you laugh the entire movie. The only way to get out of these games is by winning. With three bars on the wrist, each bar represents the avatar character’s life; they conquered each quest together. Despite the difficulties, death, and danger, they counter each level with a victory. As they all promise never to come back to Jumanji again, Spencer’s mom got sucked into the Jumanji games, which gives us the idea of Jumanji 3 is coming.

The avatar character star by Dwayne Johnson (Dr. Bravestones), Kevin Hart (Zoology, Mouse), Jack Black (Oberon), Karen Gillan (Ruby Roundhouse), Awkwafina (Ming Fleetfoot), Nick Jonas (Seaplane) is the perfect choice made by the casting director. Amazingly each of them perfected imitating the other character of the film. You will be genuinely astounded by their accuracy and attention to detail. You will see how incredible Dwayne Johnson and Awkwafina was mimicking Alex Wolff (Spencer) and Danny DeVitto(Eddie), Kevin Hart’s impression of Danny Glover (Milo), and Ser’ Darius Blain (Fridge). Karen Gillan’s mimicking Morgan Turner (Martha) and Fridge. Jack Blake showed off an impressive range of impressions by perfectly impersonated Madison Iseman (Bethany) and Fridge.

You might think the storyline was almost the same as the first Jumanji by Jake Kasdan, but that is untrue. New quest! New Danger! Unexpected death! Hilarious comedy! Jumanji: The Next Level is a Must Watch fantasy action comedy film that can be enjoyed by all generations. The Game is ON!