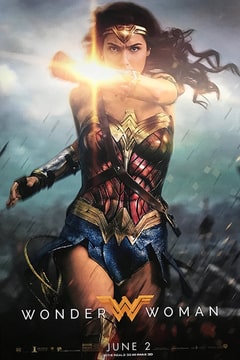 So many movies are coming out every month that the movie industry is almost impossible to follow. It’s very hard to see all of the movies that are coming out which is why we decided to do that for you and write reviews on all of them. We hope that the review will allow you to make an educated decision about which movie you should see and which one you should pass on. Wonder Woman is a movie that you’ll definitely like you are a fan of superhero movies. It’s packed with action and great performance by the actors and actresses. Gal Gadot is fighting to end a great war with her fellow men and while on this quest she realizes her true potential and her real destiny of being a goddess. (Image Credit: urbanprint.com)

The lead role is played by Gal Gadot and she portrays the character in a very great way. She is charismatic and beautiful which adds to how great this movie is. The supporting role is played by Chris Pine who is also doing an amazing job. The other cast members like Connie Nielsen, Danny Huston, and David Thewlis are also pretty good in their performance.

The performance of Gal Gadot is spot on. She manages to portray the character to perfection and Chris Pine perfectly fits into his supporting role. He plays it so well that sometimes it seems like he’s the lead actor. Gal Gadot is doing an excellent job being Wonder Woman and she’s very charismatic in this movie.

The entire production did an excellent job on this one. Everything seems like its spot on and everything is in its place. The fights, script, and action scenes are extremely well-made that they will keep your attention for the entire duration.

The script is amazing. It seems like there’s nothing out of place at all. It’s fun, thrilling and entertaining from start to finish. There might be some scenes that might be shorter but they aren’t as long to divert your attention away from or make you bored.

This movie is very entertaining. It will keep your attention for the entire duration and you will be on the edge of your seat wondering what is going to happen next. It has decent humor in between all the action which relaxes you at times and makes you laugh which is a nice refreshment.

Overall it’s a movie worth watching. Especially if you’re an action movie fan. You’ll enjoy watching it and you’ll be left wanting more. It’s a very interesting and thrilling movie with great actors that will hold your attention for the entire time and you’ll probably end up watching it without blinking.

The movie is quite well-made so there is little room for improvements. There might be some scenes that don’t contribute to the entire movie and could be cut out but in all honesty, it’s great the way it is.

A movie that any action fan would enjoy. It’s a superhero movie with a woman in the lead role which makes it pretty rare but very good nonetheless. The actors are doing an excellent job portraying the characters and Gal Gadot is very charismatic that her performance carries the movie nicely.